What types of patches are there? 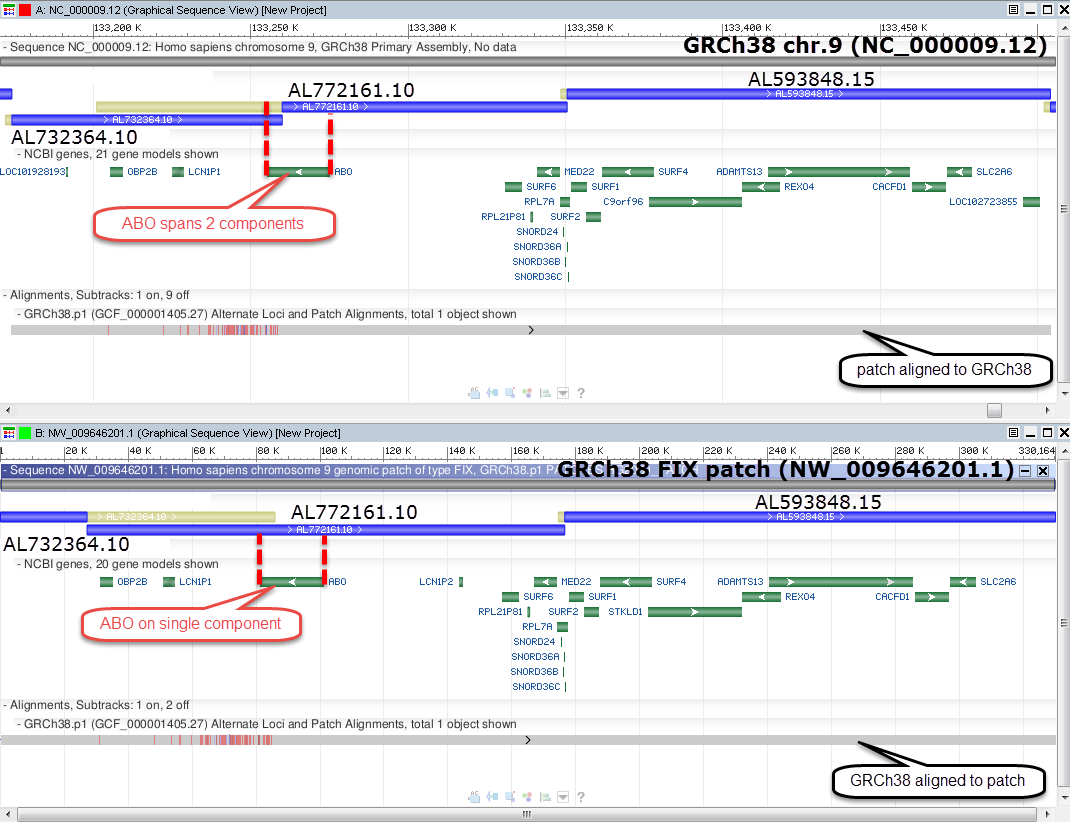 Figure 1: Example of a fix patch. The patch fixes a problem with the ABO region on chr. 9 (detailed in HG-2030. The switch points for the clones used to represent this locus on GRCh38 chromosome 9 generate a mixed haplotype that has never been observed in the human population. The top panel shows the chromosome representation in GRCh38. The blue lines represent the clones in the tiling path, the green lines represent genes and the gray line with the red (mismatches) and blue (insertion/deletions) stripes shows the alignment of the patch to the chromosome. The bottom panel shows the same information, but with respect to the patch. In the top panel, ABO aligns across a clone junction. In the fix patch, ABO aligns to a single component due to a change in the switch points between the components. 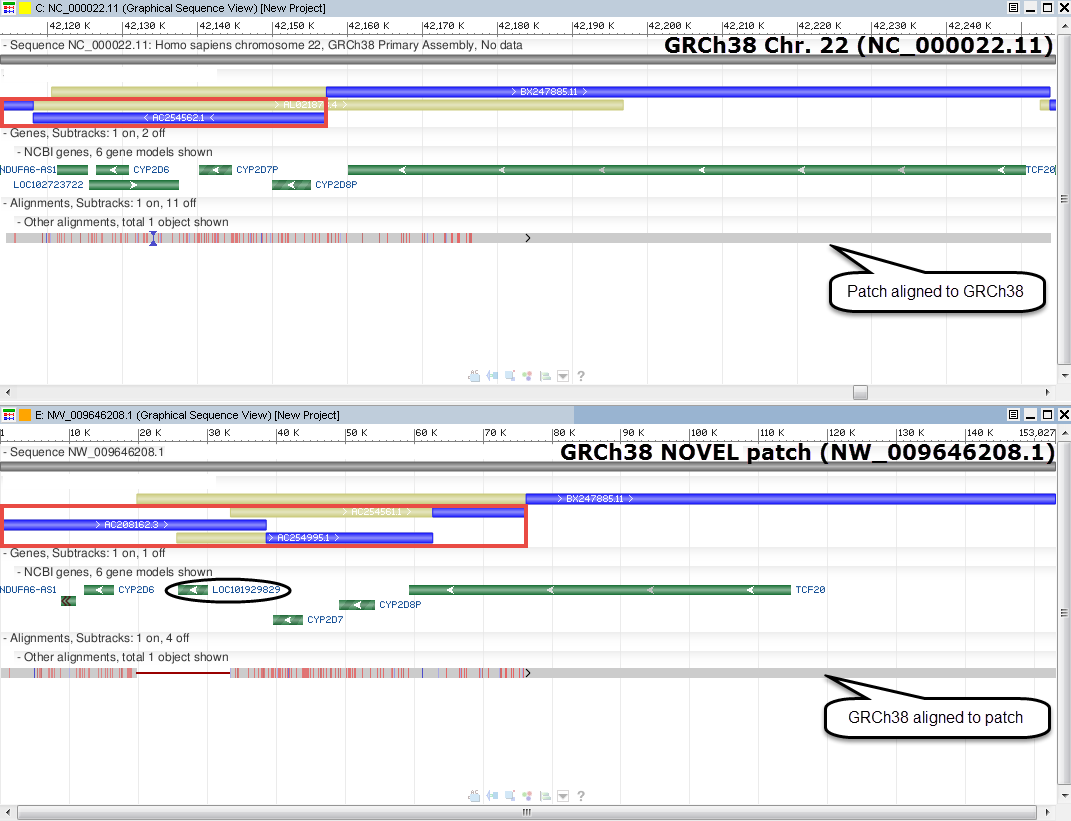 Figure 2: Example of a novel patch. The patch provides representation for a duplication allele at the CYP2D6 locus on chr. 22 (detailed in HG-2205). The top panel shows the chromosome representation in GRCh38. The blue lines represent the clones in the tiling path, the green lines represent genes and the gray line shows the alignment of the patch to the chromosome. The bottom panel shows the same information, but with respect to the patch. The thin line in the aligment in the bottom panel is an insertion in the patch. The two components highlighted in red in the top panel have been replaced by the three highlighted components in the novel patch. The duplicated CYP2D6 gene is circled.

Figure 3 illustrates the two patch types and their relationship to major assembly releases. 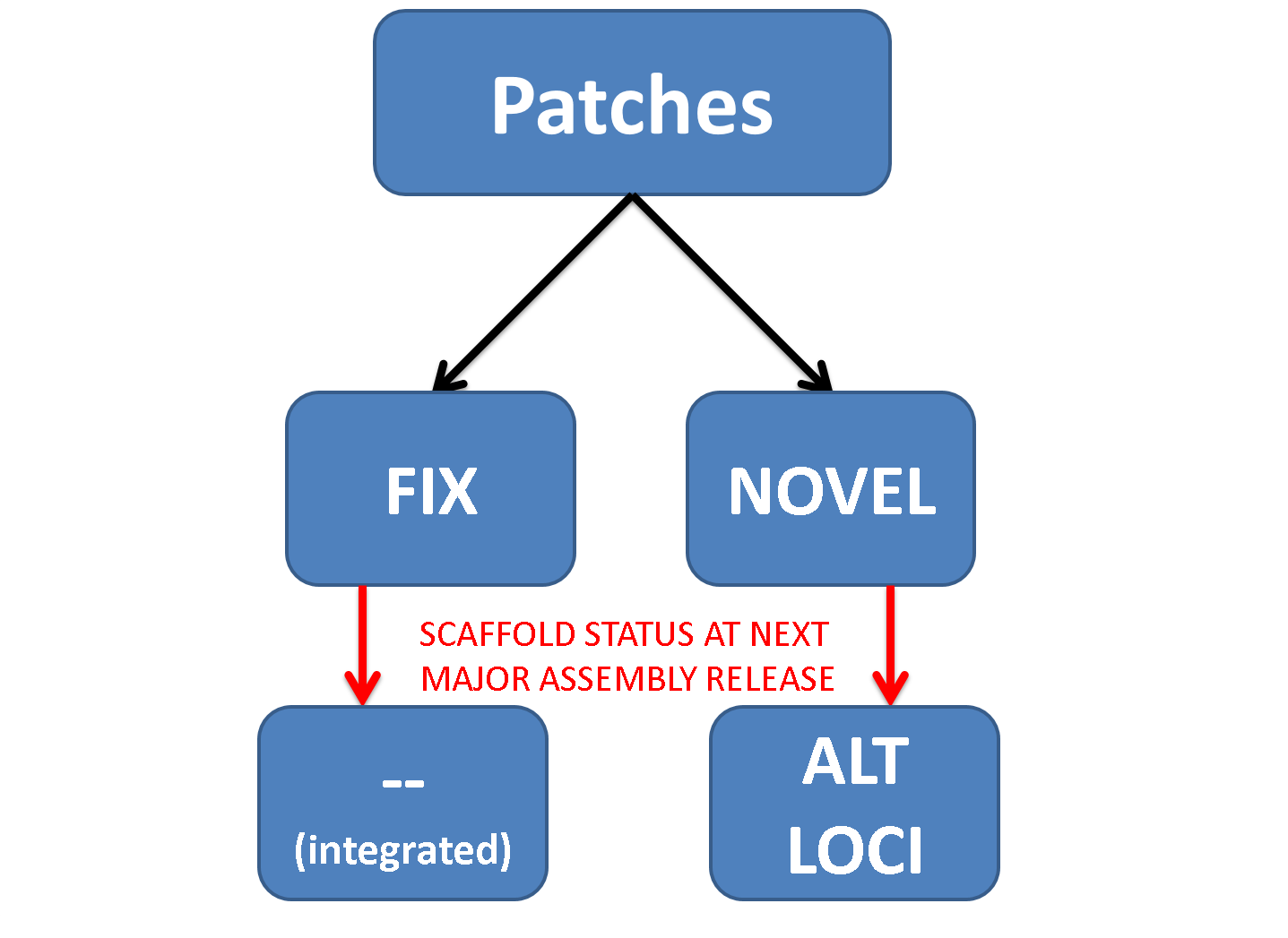 Figure 3. Cartoon illustration of the two patch types and their relationship to major assembly releases.

Do patches result in changes to chromosome coordinates?

No. Chromosome coordinates are unchanged by patches.

What is a patch release?

All GRC assemblies use the NCBI Genome Assembly model. A patch release is a form of minor assembly release in which the only sequence content that updates belongs to the PATCHES assembly unit. Patch releases are cumulative. Patch releases do not change chromosome coordinates.

How often does the GRC release patches?

Why does the GRC release patches?

Patches are a means to provide updated information for a particular genomic region without changing chromosome coordinates. Researchers performing whole genome analysis typically require stability of chromosome coordinates due to the time and effort it takes to do an experiment, and the effort involved in remapping data to new coordinates. Researchers interested in a particular locus prefer to have the most recent information. Patches allow us to serve both communities better.

How can I tell if an assembly update is a patch release or a major release?

Assembly unit accessions are provided in the full sequence reports, which you access from the corresponding NCBI Assembly pages (e.g. GRCh38.p1).

How should I refer to patches in a publication?

The assembly accession.version is an unambiguous identifier for the assembly and should always be included in publications to describe the particular assembly version used for analysis. In addition, if you are using a patched version of an assembly, for clarity you should indicate whether your analysis included the patch scaffolds. The accession.version of individual patch scaffolds should be provided when describing analyses on a particular patch. Likewise, all analyses and annotations on a patch scaffold should be described using the sequence coordinates of the accessioned patch scaffold. Use of "pseudo-chromosome" coordinates (i.e. providing new chromosome coordinates to reflect a user-defined instance of a chromosome into which one or more patches has been inserted to replace the original chromosome sequence) is strongly discouraged by the GRC, as there are no corresponding INSDC-accessioned sequences.

Where can I find the list of assembly regions that have been patched?

Please see the "Patches and Alternate" loci tables on the GRC website human and mouse pages. In addition, patch placements are available in the alt_scaffold_placement.txt report, which can be downloaded from the corresponding PATCHES directory in the GenBank FTP site (e.g. GRCh38.p1).

What implications do patches have for my analyses?

All human patches contain some sequence that is redundant to the current assembly sequence. Inclusion of patch scaffolds in alignment target sets therefore introduces allelic duplication. Currently, many commonly used aligners cannot distinguish allelic variation from paralogous variation. As a result, reads mapping to patches (and alternate loci) may receive depressed mapping scores and be excluded from downstream analyses. Likewise, variant analysis tools do not have a robust mechanism for handling patch sequences. Thus, while patches are valuable additions to the assembly (correcting errors and providing variant representations), users should be aware of these potential complications.